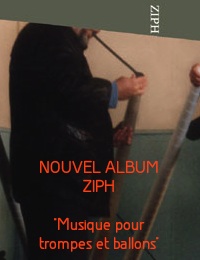 By dint of dismantling his trombone, to blow in it in a reverse way, to plug pipes and rubber balloons on it, Thierry Madiot ended up inventing a new instrument: Ziph. Seemingly simple, the Ziph only consists of 3 elements, a balloon between a roll of floor covering and a ring. The roll of plastic, twisted form a horn that provides amplification and harmonic multiplication. The ring keeps the balloon open in the way it gives the instrument a mouthpiece of brass instrument style. But most astonishing is the balloon that operate between its two parts of the membrane some vibrating, is analogous way as double reed (oboe family).
From there, everything is complicated by the fact that the balloon is long and elastic. Thus this double reed soft can be stretched, kneaded, triturated, multiplying the ways of playing. Consequently that instrument is an unclassifiable hybrid that has something to see with the trombones, brass, oboe and not only.
As a contemporary instrument, it is not focused on the pitch and thus it is sometimes close to electronic instruments more than a son of the family of wind instruments. Then as the sound is generated by a kind of reed, the instrument generates harmonics which are in return encouraged by the horn, and it result a granular signal not to say sometimes distorted.
Ziph is an acoustic instrument that sometimes pass for an electronic instrument. The instruments vary in size from 2 to 20 m and for this record, it is played in by a band of 2 to 13 musicians.