The group is declined in several projects with different collaborations and configurations. Find them on this page, below.

The international quartet Kaze, created in 2010, meets pioneering laptop player Ikue Mori, and the fusion turns out to be very natural and does not produce any imbalance. A famous improviser, Ikue Mori was an obvious choice for the members of the original quartet when it came to inviting a fifth person for the Sons d’Hiver festival in Paris in January 2020.

A strong intuitive bond unites them around many improvisation sequences: the small subtle details, the rapidly changing timbres and the ease with which everyone interacts indicate a group where each member is selflessly dedicated to creating lively and organic improvisations. Each member of Kaze brings their own compositions that provide a framework for individual solos as well as collective interaction. Their mastery of extensive techniques on their respective instruments often makes it difficult to tell if a sound is acoustic or electronic.

Watch their performance at the Sons d’Hiver Festival #29 featured by France Musique.

The members of Kaze like to multiply meetings and collaborations. Liking to play on the doubling of timbres and sound ambiguities, as it is already the case with the 2 trumpets, very quickly came the desire to double each instrument. By calling upon two major actors of the European improvised music scene, Sophie Agnel and Didier Lasserre, a double trio, a triple duo was born... Trouble Kaze. 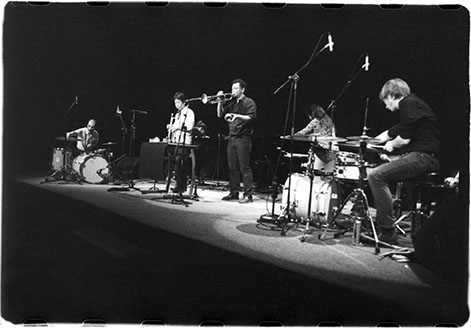 Another superb jazz-qua-jazz concert was played by the Japanese/French quartet Kaze. Pianist Satoko Fujii was a real surprise – her monstrous keyboard technique uses every inch of available space to create a harmonic and textural framework for the other players, trumpeters Natsuki Tamura and Christian Pruvost, plus drummer Peter Orins. The dynamics were defined by a great mix of quiet extended technique weirdness and free blowing passages that emphasised the unusual qualities of the line-up. Never heard anything quite like it, and their new disc Uminari (Circum-Libra) is excellent. (About Kaze at FIMAV 2015) – Byron Coley, The Wire

From another double-up angle, the rarely heard sound of two trumpets collaborating, interweaving and cross-talking is at the center of the group Kaze, whose penultimate set of the festival was also one of the high points of the overall program. Japanese pianist Satoko Fujii and her husband, trumpeter Natsuki Tamura, teamed up with musicians from Lille, France—trumpeter Christian Pruvost and drummer Peter Orins—five years ago, and formed this unique, bass-less quartet. The quartet has honed a strong distinctive group sound over the course of three albums, and at FIMAV, the set list slalomed from structured parts to an increasingly free-spirited abandon, as the musicians felt freer than usual to dispense with rules of conduct or even standard practice on their instruments. For the record, they did navigate a few chord changes, here and there, on the way “out”. (About Kaze at FIMAV 2015) – Josef Woodard, Downbeat

This year’s edition of Victoriaville was perhaps the strongest I have attended—this was my fifteenth FIMAV in a row—and Sunday’s performance by Kaze, the quartet of pianist Satoko Fujii, trumpeters Natsuki Tamura and Christian Pruvost, and drummer Peter Orins was my favorite of the concerts presented this year. As impressive as the music itself and the musical techniques, particularly the extended techniques of Tamura and Pruvost, was the control over the very sound of the instruments and the way the air moved in the room. Fujii’s piano playing was impressive, and Orin’s colorings were in perfect synch with her. Not only that, but the music was really quite humorous, Tamura letting out his comedic side with a section employing small instruments, including a pig squeeze toy that he used to great effect—the effect in aid of the music, and not as a side dish or gimmick. (About Kaze at FIMAV 2015) – Mike Chamberlain, All About Jazz

This was fantastic jazz at its most exciting ! (About Kaze at FIMAV 2015) – Byron Coley, exclaim.ca

Intense and playful, down-to-earth and international, Kaze communicates in a musical language of contrasts and continuity. Virginia Schaefer, JazzTimes

“’Noise Chopin’ honors the bicentennial of the Polish composer’s birth with a work that progresses from raw trumpet noise to a rollicking composition driven by Orins’ trap kit.” — Mike Shanley, JazzTimes

“Fujii fans will enjoy listening to the navigation of mood and atmosphere (and also to how Pruvost’s clarion lines contrast splendidly with Tamura’s comparable raunch).” – Jason Bivins, Paris Transatlantic Magazine

“For musicians getting good collaborators means a lot. It is like a getting the best friends in life.” — Satoko Fujii